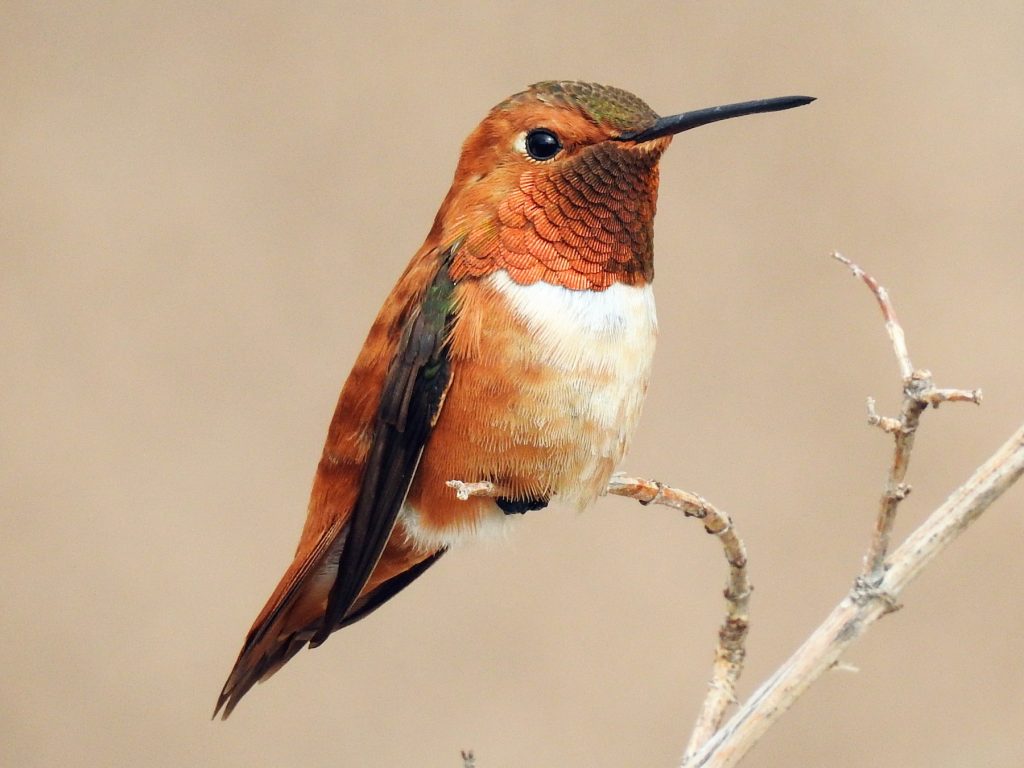 There are hundreds of varieties when it comes to hummingbirds. They are found everywhere and come in delightful colors and patterns. One of these varieties is the Rufous Hummingbird (1). It is a relatively small hummingbird and measures only about 3 inches in length and weighs only about 4 to 5 grams! It has a slender and straight bill. They have excellent flight skills. In appearance, they are challenging to differentiate from Allen’s Hummingbirds! The males of this species are slightly smaller than the females. Males and females differ in color patterns. Males have a flame-like pattern. They have an orange-red throat and rust-colored on their backs and bellies. Females have less orange plumage but have white feathers on their throats.

Rufous Hummingbirds are generally found in the northern regions. Their breeding range can extend from the Pacific Northwest to the Canadian West and even into southern Alaska. They like deciduous and coniferous forests, parks with lots of trees and bushes, yards with flowers, or flowering meadows. They are among the most easily recognizable hummingbirds because they are quite common.

They follow a circuitous migratory path every year. You can find them in coastal areas in spring, while in summer and fall seasons, you will see them in mountain regions. They complete an annual circuit of this northern range. Some Rufous are visible in the eastern and southern US during the migration period. Some birds can complete a journey of about 3900 miles from south Alaska to southern Mexico. This is the longest for any hummingbird species.

These are tiny birds with a lot of personalities! They are generally a solitary species and spend time on their own. During migration, they get aggressive, especially near feeders. They are probably the most aggressive hummingbird in North America (2). They are ready to take on anyone, even humans! They have a threat display, which is exciting to watch. It includes diving, tail fanning, strutting, etc. They like to find a high perch to sit and watch for any intruders.

Rufous Hummingbirds are not monogamous. Males attempt to mate with as many females as possible during the mating season. It is the female’s job to build the nest. She does so expertly on a tree with drooping leaves to hide the nest. Females lay about 2 to 3 eggs at a time. They don’t have any unique courting and mating rituals. These birds only come in contact with each other during the mating and migration seasons. Otherwise, they prefer to be on their own.

All hummingbirds look for flowers for nectar. Rufous hummingbird also does the same. Apart from the nectar, they like to eat small insects, sap, spiders, etc. They can hover and art around to catch small flying insects and even catch the ones who are stuck in a spider’s web. Their diet mainly consists of protein and sugar. With their long, extendable tongues, they have easy access to the sugar source that is nectar from tubular flowers. These birds need to consume a lot of food to maintain their energy levels. They can take in almost three times their body weight in food per day! They feed continuously throughout the day. Adding a hummingbird feeder to your garden is a great way to entice the birds to your home.

Most hummingbirds have a life span of about 5 years. Many of them die within the first year of their life. The Rufous hummingbird can live to about 3 to 5 years, but only if it can survive the first year. Some can survive up to 8 years of age, and there is one who lived to the ripe old age of 8 years and 11 months! It requires the right and unlimited food access, a safe environment, and easy migration routes for them to survive beyond 5 years of age.

Some of the exciting facts about these tiny birds are