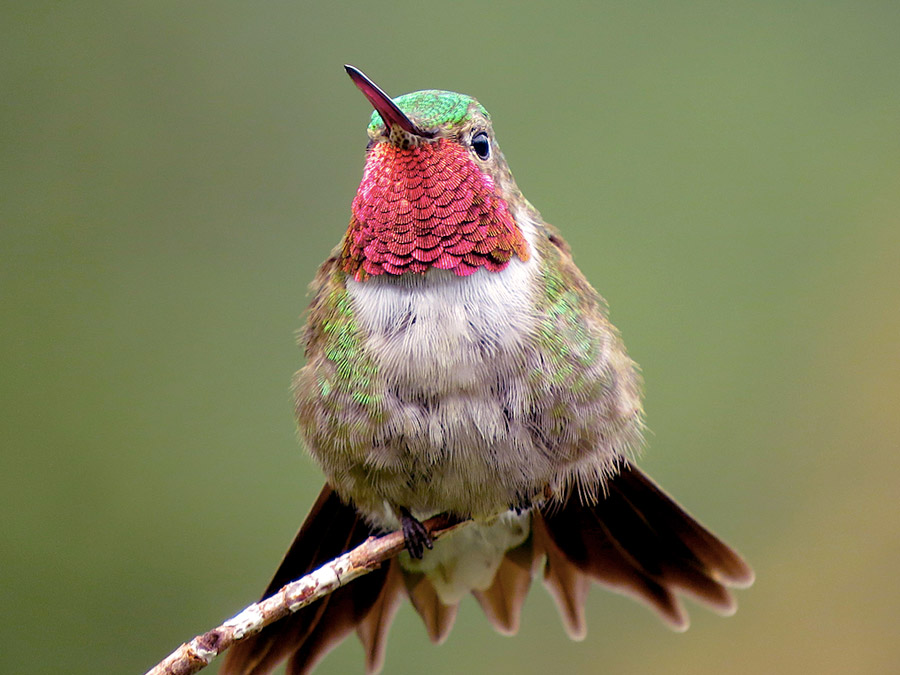 Known by the scientific name Selasphorus platycercus, the broad-tailed hummingbird is native to parts of the Western United States and parts of Mexico. Their flock is mainly seen active during the late fall and in winter.

These are mid-sized birds about the size of a sparrow with the adult growing up to an average of 4 inches in length with an overall wingspan of 13 centimeters. Similar to other birds’ species, the females weigh heavier than the male birds. A female adult can weigh around 3 to 4 grams.

Appearance-wise, these birds are sure a lot similar to their cousins Bee Hummingbird. Just that they seem bigger, their tails are quite different from the other variants of this species. Its tail is a bit longer and extends beyond the wingtips when it is resting. Both male and female bird has iridescent green color on their backs with a white eye-ring. Adult male birds have a magenta throat which distinguishes it from the females and juvenile birds.

The female birds have pale coloration, spotted cheeks, and cinnamon-colored spots on their throats.

Broad-tailed hummingbirds prefer shrubby habitats near evergreen trees such as pine, oak, etc. They love resting under the canopies of pine and oak woodlands. It forages for food in flower meadows and grasslands. Their breeding habitat is closer to the high-altitude areas such as subalpine grasslands that have an abundant growth of flowering plants, foothills, and valleys.

These birds can be found throughout the Western United States and the regions from Guatemala to Mexico. It is also be seen wandering around British Columbia and along the Pacific Coast.

Broad-tailed Hummingbirds migrate short distances to escape the cold temperatures in Winter. They migrate to Mexico or Guatemala during winter and return to their habitat during Spring. It may be noted that there is a specific section of these birds that do not migrate, and this behavior is referred to as “sedentary.”

The broad-tailed hummingbird is known for producing a variety of shrill sounds. They produce slightly metallic and sharp tweets or squeaks. Even the sound of the wings flapping or fluttering can produce distinct sounds. While one form is the usual wing hum produced while it flies, the second one is a wing trill, which is made by a male bird to display its courtship skills and attract female hummingbirds. It is a buzzing sound that can be identified by other female birds from a distance of 75 meters.

They also display their flying skills by going high and then performing a dive while making the trill sound to attract females. These birds, like their cousins, follow a promiscuous mating system where one male can mate several females in one mating season. The male birds also do not assist in nest construction or caring and feeding of the young ones.

The female birds will lay two eggs every breeding season, which will take around 16 to 19 days to hatch. It is common to see the mother bird caring and feeding the young ones for several weeks.

These birds feed on insects and nectar from flowers. They love flowers that have red corollas with a tubular shape and have a good supply of nectar. The broad-tailed hummingbirds usually hover around to catch insects in midair. If you wish to encourage the Broad-Tailed Hummingbird into your yard, then purchase or build a hummingbird feeder that matches the flowers they prefer. The best hummingbird feeders are ones that also prevent other animals from accessing the nectar.

The lifespan of a broad-tailed Hummingbird ranges from 3 to 4 years. However, the longest living broad-tailed hummingbird lived for a longer span of 12 years in North America.