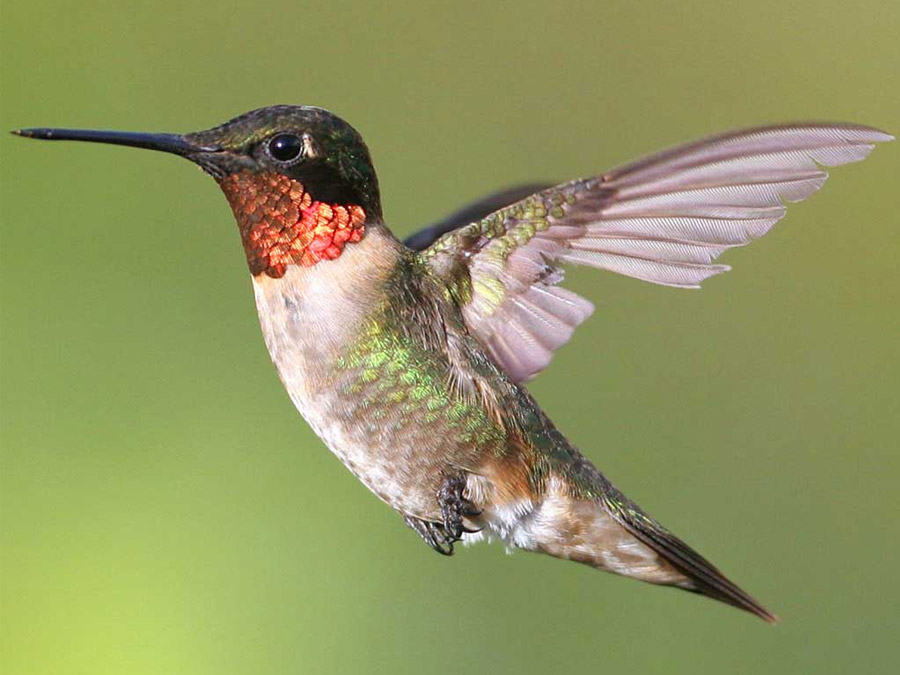 Scientific known as the Archilochus colubris, the Ruby-throated Hummingbird is one of the smallest and lightest among the hummingbird species. It measures only about 7-9 cm in length and weighs about 2-6 grams. The bill of the bird is very slender and curves slightly downward. The wings are also short and do not even reach the tail. The average wingspan of these birds ranges between 8 and 11 cm.

True to the name, the Ruby-throated hummingbird’s sparkle like colorful jewels in the gleaming sun. Thanks to their natural shade of bright red and green. The birds mostly have a golden green or an emerald-colored crown and back with greyish-white underparts. The distinguishing feature of the male Ruby-throated hummingbirds is that they have red throats that appear darker than usual under dim lighting.

Apart from these natural habitats, you will even find the birds hovering over beautiful flowering gardens or at the edges of woodlands and forests during the peak of summer. Ruby-throated Hummingbirds are also a common sight in the suburbs and towns where you can find them feeding on hummingbird feeders and tubular plants placed at parks, in your garden, or porch.

Thus, besides nesting on coniferous and deciduous trees, the familiarity of the bird to human habitation makes them nest even in your backyards on human-made loops made of wire, chain, or extension cords. You will also find them in old fields, fruit orchards, and along the banks of a flowing stream. During winters, the birds prefer the citrus groves, scrubs, hedgerows, and dry forests.

Despite their small size, the Ruby-throated hummingbirds are precision-flyers with an exceptional ability to fly instantly from one nectar source to another in the blink of an eye. They then hover over and adjust their position over their feed with utmost care and control, which mostly consists of tubular flowers and small insects.

The birds also can hang midair in a motionless posture. The Ruby-throated hummingbirds can neither hop nor walk because of their short legs. As such, they can only hover or shuffle from one branch to another. However, in doing so, it only leads to scratches in their head and neck due to the foot-up movement over their wings.

While discussing the male and female Ruby-throated hummingbirds, you will notice that the male birds do not stick around too long. Once the courtship and mating season ends, the male partners take off and are on their own. While displaying courtship, the male bird marks his territory by creating a U-shaped loop, which is 50-feet above the target female. If the female bird lands on the loop, then the male bird responds by making swift flights sideways facing his partner. Male Ruby-throated hummingbirds also display excellent aggressive behavior when it comes to defending their feeders, which often leads to long chases and stabbing their opponents using their beaks.

The Ruby-throated hummingbirds vanish at the sight of a nectar-rich source. The birds prefer feeding on bright orange and red tubular flowers such as the red morning glory, red buckeye, cardinal flower, trumpet creeper, jewelweed, honeysuckle, bee-balm, and alike. They even like to feed on hummingbird feeders and sugar-rich tree sap.

Besides feeding on direct nectar sources, the Ruby-throated hummingbirds capture insects, aphids, and caterpillars from sap wells and leaves. Other preys include spiders, gnats, small bees, mosquitoes, and fruit flies. Feeding on insects is necessary especially for the young birds, as insects are rich sources of protein, which is normally insufficient in nectar.

On the other hand, records also show us that the longest living bird was a female and was at least nine years old before the officials at the West Virginia banding operations recaptured and released her into the wild.