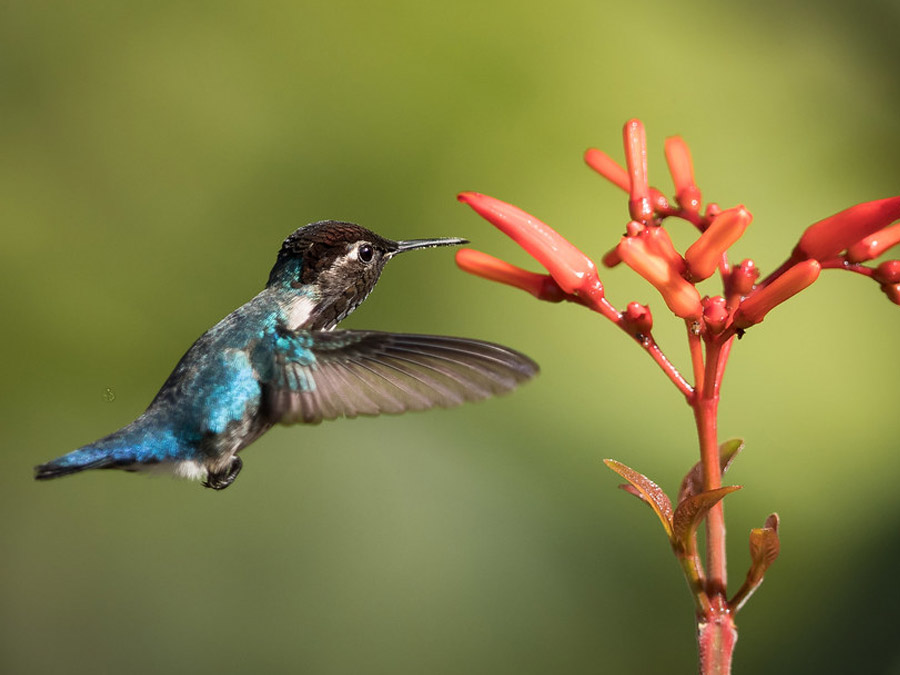 Ever watched the Bee Hummingbird in action? You would have if you traveled to Cuba. It is one of the most intriguing species of birds which have many superlatives to its credit. Let’s explore more about this world’s smallest living bird.

These tiny yet exciting creatures are the miniature versions of this smallest birds in the world. It is so tiny that you might easily mistake these winged wonders for bees or insects. The bee hummingbird in flight is a sight to behold as it flaps its winged about 80 times per second, and during the mating attempt, it can flap up to 200 times per second. Now that’s what I call a hyperactive bird.

Though these are tiny creatures, they look very attractive, with both males and females having bright, attractive feathers of various hues all over their bodies. The males have bright fiery red throat and upper parts blue. The female has white tips on its tail feathers; the upper body is bluish-green, and below it is whitish or gray. Though you will find the other variants of hummingbirds are slender, these tiny birds look more rounded and plumper. It has a shiny coat, which makes it look like a glittery jewel.

These swift fliers seem to have a favoring to live in the lowland locations even though they are found even at high altitudes. You will be able to find them in the coastal forests, swampy places, valleys, and even in gardens.

Bee Hummingbirds are native to the Cuban group of islands. You should be able to find them all over the main island of Cuba, West Indies (Isla de la Juventud). They are found in large numbers in and around the mogote area of Cuba, while their population is relatively less in the Playa Area close to Havana.

The average weight of these tiny birds ranges between 1.95 grams to 2.6 grams, with the females being heavier than the males. Their body length can vary from 5 to 6 centimeters in length. The Bee hummingbirds are strong and swift fliers.

These birds rarely migrate as the climate of the natural habitat is mostly favorable all through the year. However, they can cover short distances foraging for food. If you would like to encourage the Bee Hummingbird into your garden, consider setting up a feeder. The best hummingbird feeder is one that the hummingbirds themselves can eat from, but it also prevents ants, bees and other animals from reaching the food.

This tiny bird species is mostly a loner except during the mating season, which is typically from March to June. They are also polygamous, and a single male may mate with multiple partners during the mating season. As diurnal birds, they are quite active during the daytime. You will be surprised to their strange flying abilities like flying straight up and down, backward and even upside down.

They mainly thrive on nectar from flowers and maintains a herbivore diet. However, occasionally you will find them feeding on spiders or other small insects.

The lifespan of these nectar-feeding birds depends on their habitat. In the wild, they have a lifespan of up to 7 years while in captivity, they can live for 10 years. The female birds lay two eggs at a time, and it takes about 22 days of incubation for the hatchlings to come out. Nestlings have a rapid growth rate with the chicks developing full wing feathers at around 18 to 24 days from the day of hatching. Now they are ready to move out and forage for food on their own.