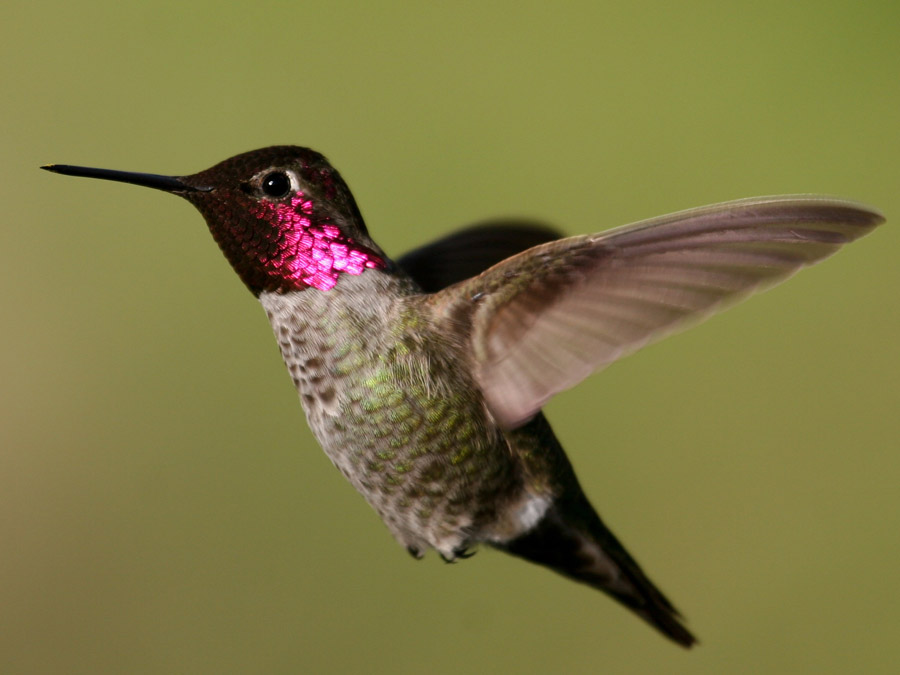 Anna’s Hummingbird is a medium-sized hummingbird named after the Duchess of Rivoli, Anna Massena. You can find them most commonly along the Pacific Coast. Their appearance is striking thanks to the iridescent green feathers and shining rose-pink throats. No wonder a group of hummingbirds is sometimes called a bouquet of hummingbirds! Males have a dark red color crown and gorget. Females also have a red gorget, but it is less flamboyant than the males’. Females have a dull green crown and a grey throat. Its size can be between 3.8 to 4.3 inches in length. Its weight is between 4 and 4.5 grams. Anna’s Hummingbirds are bold (1) and striking in appearance and are found throughout the year along the Pacific coast.

These birds are common in yards, parks, riverside woods, and coastal wooded areas. They come to the hummingbird feeders readily, and if you have lots of flowering bushes and plants, then you will find them often in your garden. They can be found from central Baja to southern British Columbia, along the Pacific Coast. You can also see them in southern Arizona and extreme southwestern New Mexico. They like open woodlands, but they adapt to urban and suburban parks and gardens as well.
The birds which live in the extreme southern and northern areas may migrate, but most of the other Anna’s hummingbirds remain in the same area throughout the year. There have been some incidents of these birds traveling to eastern Texas and western Louisiana, but these are rare. Mostly they stay near the Pacific Coast and don’t wander far from this area. In recent times, the range of these birds is expanding. The reason could be the increase in the flowers and feeders in the growing suburban areas which lie along their migration path.

One of the most impressive behaviors of these birds is the male’s courtship dive! He flies high in the air and then dives (2). At the bottom of the dive, he makes a loud noise. This popping sound is also called the ‘dive noise.’ Apart from this, the birds also make buzzing, chirping, and chattering sounds. Males generally sit on a tree or high on a small bush and make a lot of chattering noises. Males and females mate with different partners.

They don’t like sharing their territory and prefer to be on their own. They want to keep their food and hiding space to themselves. One exciting thing about these birds is that they can slow the rate of their metabolism to about 1/15 of what is during the day. It means that they can live in colder areas. This is somewhat similar to hibernation, and they go through this on cold nights to stay alive and healthy.

Like all hummingbirds, Anna’s Hummingbirds also need protein and sugar to remain active. However, these birds are more of carnivores! They do take in a lot of nectar, but they eat more insects and spiders than most other hummingbirds. They will wait near a spider’s web to pluck off trapped insects. They also like sap and drink it when they are not able to find nectar. They have an extendable tongue with a groove in it to let them drink nectar quickly from flowering plants like currant, gooseberry, and even eucalyptus. They generally target smaller insects like midges and whiteflies. Hummingbirds make great additions to backyards, and by using a simple Hummingbird feeder, you can attract these beautiful animals to your garden.

Anna’s Hummingbirds have a lifespan of about 7 to 9 years. Most hummingbirds don’t have a very long life span, and there are other reasons which make it difficult for them to survive. These birds like to live close to highly populated areas. Domestic cats like to hunt and kill them. They don’t usually eat them, but it is probably their hunting instinct. In the wild, Anna’s Hummingbirds can live longer, depending on the area. In the wild, also they face threats from snakes, poisonous spiders, and wild cats.

Some interesting facts about Anna’s Hummingbirds